Wednesday night, an episode of “Star” on Fox TV at 9:00 p.m. EST, will stir controversy by exposing the religion and sexual orientation perspective, of the African American community, particularly the concept of transgender. The show will not be gentle, incorporated within the subject “adultery in the Church” and “subjects of the bible” will be touched upon.  Members of the cast; Amiyah who portrays “Cotton”; the transgender son, Tyrese Gibson, “Pastor Harris”, Queen Latifah, “Carlotta”; the mother of Cotton and lover of Pastor Harris  will bring us to the kitchen table of a family dealing with acceptance of transgender.

“GetaGetten” was granted an opportunity to interview American film and television Producer, Lee Daniels, Award winning actor, songwriter, singer and model Tyrese Gibson and new upcoming actress Amiyah.  Lee explains that, “Star” depicts the Black culture dynamics it’s the modern day “Good Times”.  He wasn’t shy about admitting to the challenges he has faced in his career and Empire, Butler, Precious, each transpired from him “living in his truth” and he dares to tell the stories that we as African Americans experience but, we never see.

Insight into the battles many in the transgender community deal with in order to live in their truth, has not been understood nor acknowledge and Lee says; he is not uncomfortable with being uncomfortable.

Tyrese (Pastor Harris) is well known for high action movie roles but, being new to television has given him the space to explore the “complexity of humanity” as Lee Daniels phases it.  Tyrese went on to explain how, executing a role of this status forced him into a very uncomfortable space, “it was a struggle portraying a preacher”, because strong religionist beliefs has been the foundation of the African American community for centuries, coupled with his own Christian beliefs which he expresses as “being Married to GOD” and his concerns for the LBGT community.

Amiyah (Cotton) admits to being in awe with landing her first acting role on “Star” and working with Lee Daniels, Queen Latifah and Tyrese.  Yet, she explains; the intensity of filming the “table scene” stemmed from her real life experiences, being a transgender she felt vulnerable portraying a role which actually depicts her life. 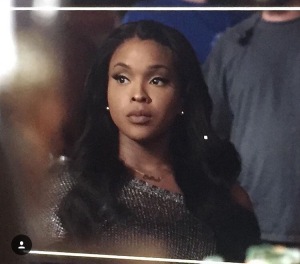 But, she states; “the role allowed for the release of emotions and becoming the unheard voice”.  This episode of “Star” will be powerful and controversial, it is a subject that not many speak of yet, many deal with each day of their lives.  So let’s join Cotton, Carlotta and Pastor Harris Wednesday night and become uncomfortable.

Follow them Wednesday night and twit your thoughts with the hashtag #Star.  Watch past episodes of “Star” at HuLu and Apple TV…catch up!

Stay in the Know